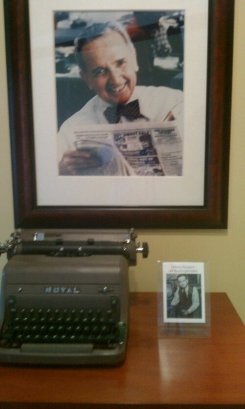 I attended an editing workshop at The Poynter Institute this week. In some ways, I don’t really know why. I’ve never held an editing role in my life. I’m not particularly enthused by the thought of reading over other people’s work. And for all I know, editing is the red markup you get back when your writing is bad. Who would ever aspire to be that person, that word janitor?

Beyond reason, I went to the workshop anyway, and I’m glad I did. It certainly didn’t hurt that Poynter is conveniently located in St. Petersburg, Florida, home to soft white sand that sifts seamlessly through your toes and a sun that coalesces beautifully with your skin.  I figured that my indulgent beach lounging would be justified if I acquired some form of knowledge in addition to a bronze glow (which ended up being more lobster-red than anything).

The other attendees at the seminar were  -surprise!- actual editors, and way more accomplished than me. I was humbled to sit alongside some really impressive individuals. Shout-out to Lisa, a news editor who works for a news wire I can’t pronounce (the Swedish version of the AP) and who travelled all the way from Stockholm! The 15 of us learned tips on line editing, brainstorming story ideas, coaching reporters, and social media. But for me, the most important takeaway was quite basic: an understanding of what an editor actually does. 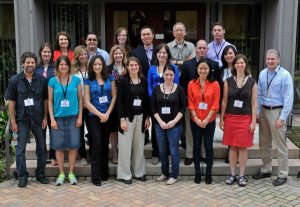 Traditionally, the image of an editor conjures up images of a white male, legs perched on a desk, brooding over a newspaper mark-up or proceeding over a meeting. It’s a grand representation of man’s authority over what is “fit to print”. That image is partially true. But there is also a softer, less tactile element that involves the relationship between editor and writer. I learned that editing, at its core, is less about being a hardline news guru as it is helping to nurture and coach writers to construct stories in a way that enhances their value beyond the individual lens.

So, the most basic question an editor must ask is: “What to look for in a piece of writing?” Looking over someone else’s work is a huge responsibility. The first temptation is to rewrite from our own lens. All spelling, grammar, and syntax aside, I learned that there are really only 2 important things to look for: theme and clarity.

Theme  – A story is only good when you know what it’s about. At the end of a story, you should be able to easily identify the core message.  If you can’t, that’s a problem. Determine the focus of the story and be sure that every section directly adds to that theme. This eliminates redundancy and trims fat, builds muscle.

Clarity – This goes hand-in-hand with theme. If you know the theme, find a way of mapping it out – clearly. Kelley Benham, a writer and editor for the Tampa Bay Times (whose recently Pulitzer Prize-nominated piece you should read) recommended “running a chronology comb” through the writing. Making a timeline with a logical procession of events usually helps to construct stories with absolute simplicity and clarity.

I found these guidelines reassuring and helpful. Previously when given a piece to edit, I would strap on my writing helmet and enter battle. Never was the pen a mightier sword as it slashed through words and corrected spelling like a gallant warrior. (Allow me, itt was the closest I’d get to feeling like my life was an action movie. These days, it’s not so glorious when everything is done on a blinking screen; I type louder to make the process seem more dramatic.)

But in reality, making the paper bleed is not an editor’s job. It’s the reverse, actually; becoming a word janitor is what happens when you don’t let the writer do what he or she is supposed to do: write.

“What’s better than rewriting is to take an extra few minutes diagnosing the story’s one or two biggest problems (but not all of them) and return it to the reporter for adjustments. This is good for all concerned. You won’t get bogged down doing someone else’s jo b while oher stories pile up. And the reporter will be able to take pride in the story. The story’s minor problems tend to get straightened out in the rewrite process.

Good editors often have a lazy streak. Instead of impulsively jumping into the fray, put your feet up and figure out how to get somebody else to do the work. Things usually turn out better that way.”

Rather than rewrite, an editor’s job is to discuss the story and make it culturally relevant, together, with the writer. It is to make the story so deep, rich, and revealing of something deeply embedded within our human nature. It is to find a story that rises above the individual lens, that spreads its wings beyond the mere facts. That’s editing.

I knew I was attracted to it for a reason.

*Many thanks to the staff at Poynter for a well-organized and insightful workshop. I highly recommend their training programs to those in the journalism profession looking to sharpen their skills. Special thanks to Tom Huang of the Dallas Morning News who led the seminar and encouraged us to find our “personal dimension” to this line of work. The story will continue to evolve, but I think, just maybe, I’ve found the beginning scraps. 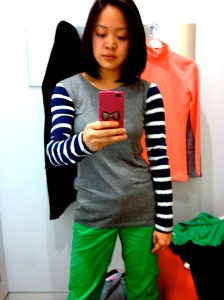 Last night, I attended a NYC VIP shopping event for a store opening. The event was sponsored by a reputable magazine and the magazine’s style editor was in attendance. I went, armed with a purpose. Pitch startup idea, make an impression, smile and conquer.

<<< I also shopped a lot. Though in retrospect, I wouldn’t suggest pitching while wearing green pants. People may not take you seriously.

Easy in theory. Here was the reality:

1. Unless you personally know the owner, an event is never as “exclusive” as you think. I arrived 15 minutes after opening and the store was packed. With doors wide open, people were pouring in because…everyone was invited!  Receiving a forwarded email from a fashion friend with the word VIP in fancy font had fooled me into believing that this was an actual exclusive high-brow event. Apparently I’m naive enough to believe everything I read. Reality check #1.

2. Upon finding my target, I froze. What was I actually going to say? I had rehearsed the pitch a million times only to realize that you can’t just go up to someone and begin pitching. To be a smooth criminal, you must determine how to start a conversation with someone who has far more better things to do than talk to you.  Reality check #2.

3. Once you finally begin to pitch, everything that’s been rehearsed goes unrehearsed. Words sputter and things you swore you’d never say come out. Rambling commences. The perfect elevator pitch is not what you need because the circumstances for a standalone elevator pitch to thrive don’t exist. Instead, proper cushioning and social grace are more effective. Reality check #3.

4. Leaving with 3 new business cards, I’m quite satisfied. Only to realize later that I’ve lost them! Alas, I remember their names! A simple search reveals all the necessary contact information…and Google saves the day! So wait, was all that networking anxiety even necessary?

In summary: if you’re a startup or someone trying to win hearts and minds, note the following:

1. Your pitch doesn’t matter. Context does.

2. What is advertised is not what you get, usually.

3. Brevity, transitions, and cushioning are gold.

5. Try hard, but not too hard. Nothing is ever worth the anxiety.