My friend Kristin who has been out of the country for 18 months returned to the States this weekend. Before going home to Florida, she made a stop in New York City where she was greeted with big hugs, kisses, and a rousing homecoming from close-knit friends. We ate cupcakes, shopped, and hair-flipped our way through New York City like an obnoxious group of sorority sisters. It was almost like college again 🙂 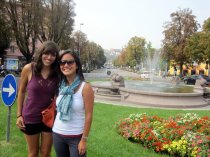 Kristin and I traveled together last summer when we both taught English in Italy through a program called ACLE. We have always shared a strong connection through our mutual love for traveling and culture, but it was our OBSESSION with gelato that really solidified our bond. (One scoop? Try two or three…per day.) I left Europe after 3 months but Kristin stuck to the peripatetic life for another year and a half. Her travels took her from Italy to London to Paris to all throughout  Asia (Taiwan, China, Singapore, Thailand, Malaysia).

Over dim-sum on Sunday, Kristin shared stories about her travels, ranging from her run-in with Asian girls at karaoke ‘gangnam style’ to the incredible hospitality she experienced in Malaysia. Kristin has always been an adventurous spirit but she has now surpassed everyone within our circle of friends in sheer bad-ass status with the number of far-fetched tales she has.

She is that girl, the cultured one, the one who has friends everywhere because she’s actually been to those countries. She’ll begin a story with “This one time, my Dutch friend…” On a practical level, she can tell the difference between a good macaroon and a bad one, and has developed a strong inkling for when someone is ripping her off. She appreciates hole-in-the wall authenticity over flashy tourist traps. As a plus, she can probably educate you on all the details of the various visa application processes since she’s faced several interesting experiences with that herself. Read all of her helpful travel tips on her blog, Lost Abroad.

A year and a half seems like a long time. But as Kristin said herself, it’s really just a spec. What matters more than all of her worldly stories is that she can still snort a big laugh and engulf several slices of American pizza with a smile on her face.  Some things never change…and they never should.

“Nothing of me is original. I am a combined effort of everybody I’ve ever known.”
-Chuck Palahniuk

Though this tramps rudely on my artfully formed identity, it does remove some of the pressure.  I am a skilled shopaholic only because my middle school friends would berate people who left the mall empty-handed. (Thus, my impressive amount of debt now can only be attributed to them.)  I am quick with “that’s what she said” jokes (if those can be even considered jokes anymore) only because my college roommates and I flung them around all senior year.  I am a terrible bowler because…well, who cares about bowling anyway. No one I know likes it, so I don’t need to.

We can use this reasoning to deflect individual responsibility for character deficits, or things we’re ignorant about.  On the same token, we can’t take credit for our seemingly original insights. If I am a mere mishmash of the people in my life, my character is really just a representation of my taste.  To that end, I try to surround myself with people I strive to be like.

Author Courtney Martin used the term ‘friend crushes’ in her latest piece about being your own mentor in a freelance economy.  Since freelancers don’t have an easy structure to guide their work flow or career path, they must learn how to hold themself accountable to personalized goals and deadlines.  This involves seeking ‘friend crushes’:

Sometimes you have to go after a collaborator or a work gig. I’m not big on “networking”—at least the version of it talked about in women’s magazines and at some alienating conferences. But I do believe in “friend crushes.” If someone does particularly awesome work, or has a way of looking at the world I find really unique, I will go out of my way to get to know them. It’s never with a set goal in mind, but more with the faith that putting a bunch of amazing people in my orbit will guarantee cool opportunities arising down the line.

It’s an interesting balance of individual initiative and creative collaboration, something which will become an increasingly important skill to cultivate as our world becomes less streamlined.

One of my biggest friend crushes is Joanna Galaris, a cultural chameleon who’s lived in 8 countries.  By some stroke of luck I selected her as my mentee in a college organization.  The tables have since turned and she’s now more like my mentor. Though she is just a junior in college, I think she has a much more solid grasp on the purpose of college than most people.  Here’s something she wrote recently on her blog:

In college, we are constantly bombarded with people telling us that we must follow certain academic tracks and what the complementary internships and volunteer experiences to those tracks are and that our GPA is somehow related to our self-worth. I think this is nonsense. I would like you to un-learn that information. Yes, what you study in college, particularly if you are a STEM student, will probably determine the job you get paid for at first. But there are unlimited possibilities to expand your knowledge and your skill set so that you can be competent in many fields. I am a passionate Anthropology student but I have no intention of being an Anthropologist for the rest of my life. I do hope that I will get the opportunity to do public health research in Eastern and Western Africa and find incredibly creative ways to work within local health cultures to implement public health campaigns in under-developed areas. I do want to be a medical anthropologist. But I also want to be a carpenter, a musician and a writer. I want to speak French, Swahili and Arabic fluently and improve my command of the English language. I want to better my public speaking skills and learn more about where my food comes from. And I am 100% confident that I will be successful in all of these things.

Of course, this raises the age-old question of whether it is better to be a jack of all trades or an expert in one subject. There is value to both focus and well-roundedness.  Regardless, she touches on a fundamental component of college that is too often failing to be ignited – curiosity.

Many have criticized American universities for becoming overly social, a wasteland of drinking escapades and drunken epiphanies. That is true, but social is not always bad. For some, the classroom is too formalized and contained for curiosity to flow.  Learning thrives instead among candid discussion with peers.  This does occur in the classroom, but personally I am more comfortable discussing serious topics among a trusted group of friends who won’t judge my oversight or lack of knowledge in a topic.  This is why I think the concept of ‘friend crushes’ cannot be underestimated. Joanna, again:

Most of us in college right now are frustrated with the quality of education that we are receiving because we are failing to personalize our college experience. If you hate being in college and you can’t wait to graduate then it’s probably your own fault. If you are studying something that does not interest you and aren’t stimulated by the classes you are taking, then change your major. If you’re failing in your area of study and your classes make you feel dumb or incompetent then you’re probably in the wrong field. You are neither dumb nor incompetent. Dedicate the majority of your time here to something that you think you’ll be excellent at. It will make you happy and make it easier to tackle the harder stuff.

For those who don’t know what they’re good at or what makes them happy, fear not. That’s what life is for. College is just one of those unique social environments for you to experiment and ignite that curiosity alongside others who are also trying to figure it out. It will come easier when you’re exposed to those ‘friend crushes’ who you admire, perhaps cooler than you, but eager to share a bit of their insight with you, and vice-versa.

My social life is one of my top priorities because I surround myself with people that are talented and have skills that I don’t have. When I spend time with my friends, I am learning from them. I am taking in who they are and absorbing all of the things that I love about them and taking notes. Having lunch with a friend can be just as inspiring as sitting through a great class taught by a brilliant professor.

My life mantra is ‘everyone has a story’. Everyone can teach you something. So don’t be afraid to seek out those friend crushes and spend time discussing and honing the skills that will make you successful together. 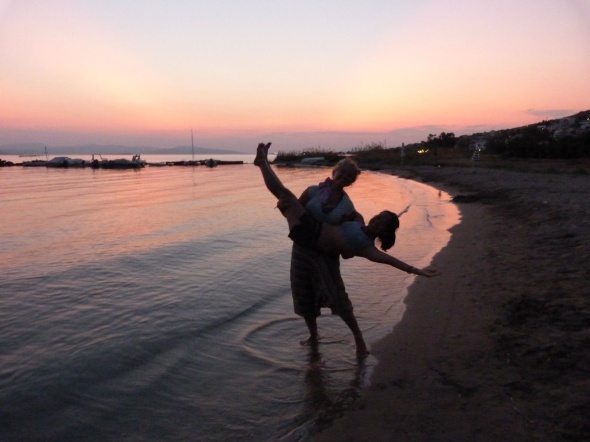 How can you not have a crush on her when she takes you around the Greek islands?