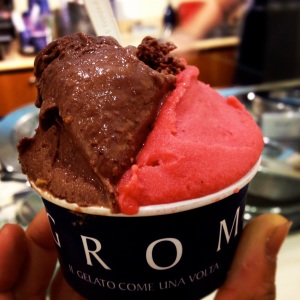 I’m facing the hard truth that my metabolism is slowing down and I can no longer eat ice cream or pizza whenever I want without facing some consequence.

I am using the remaining days of November to elucidate goals, and write about how I plan to make positive change in myself.  I’m starting with health because it is the most important aspect of life. Without it, we would be dead. Plain and simple.

But it’s more than a matter of life of death. There are rungs on the health ladder; rock bottom being a lump of  lethargic uselessness, the top being “Ironman/woman status” which is borderline intimidating. I aspire to be slightly above the middle rung, fit enough to run a marathon (in good time), weak enough to have a man still feel obligated to carry heavy things for me. 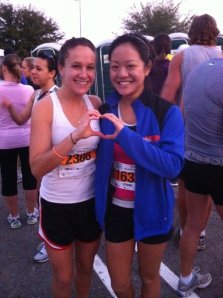 I used to be there. Nearly two years ago, I ran a half-marathon in  1 hr 48 mins, ranking 13th in my age group among women. It wasn’t the New York Marathon but I don’t necessarily have an athletic predisposition either, so I was happy. Soon after this personal victory, I entered my last semester of college with a full and ready heart to live it up. Senioritis was like glutton-itis. I drank and ate really well. Too well. Some friends and I even started a tradition of eating incredibly terrible (and by terrible, I mean DELICIOUS) foods heavy with the words fried, sweet, and caloric. We called ourselves FAFLs (I’ll let you guess what it stands for).  A summer in Italy and a year in New York later, I’m about 8 pounds heavier than when I ran my half-marathon. That’s almost 20 pounds heavier from where I was at the start of college. At that rate, I’ve gained about 5 pounds a year for the past 4 years. Something’s gotta give…soon.

I’ve received several reality checks over the past few months, which I’m gradually awakening to. The first was several months ago when I came home, stepped on the scale for the first time in a while, and gasp! (There’s a reason I don’t own a scale in New York.) After that, I was able to lose 5 pounds in the 3 weeks I was home with the help of my Mom who I now see as a commando dietician. In theory, the weight loss was simple: move more than you take in. My Mom cooked only healthy food and made sure I wasn’t snacking in between meals, even when I was “hungry”. Back in New York, I gained those lost pounds back, simply because the allure of eating out and my love for baked goods lured the pounds back in. It made me realize that you truly are what you eat and do. On this most recent visit home, I got another reality check when I was so sure I could fit into Size Small that in the midst of doing so, I broke a button. Needless to say, I got a Size Medium.

This all may sound incredibly trivial and dramatized. Medium is by no means big and I’m certainly not fat, but to a girl who’s been Size 0 and been able to fit into Abercrombie Kids until recently, the added weight is a big deal. Trust me, I don’t necessarily want to return to skinny minnie days. My body is more womanly and beautiful than it was then. So this isn’t about weight. It’s about being healthy and knowing that I own my body, which I truthfully can’t say I do now. I barely run 2 miles without having to stop and catch my breath. My face is pudgier than I would like. (Allow a girl a little superficiality.) I often feel like an oompa loompa after meals.

‘Once to the lips, forever to the hips’ is becoming ever more true. I drafted the following manifesto to combat this. 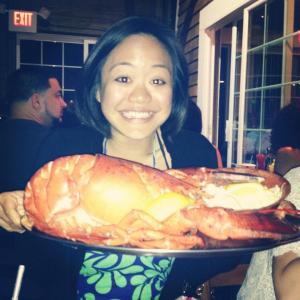 Preamble: It does not involve 5-pound lobster.

Exercise, defined as “moving the body as much as possible”. Do something active at least 5 times a week. If gym is not possible, walk while talking on the phone, do 10 pushups, jump up and down sporadically, throw a spontaneous solo dance party. Don’t sit as much. Move.

Moderation, defined as “appreciating food but knowing when to stop”. When the appreciation stops, stop. When stomach feels like it’s about to burst, stop. If eating out of a bag of processed food, stop after reaching in twice. 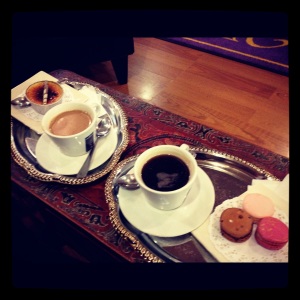 Ultimately, it’s hard to resist a cute French bakery. But a girl’s gotta have some hips. So, allow her that. Just a little.