It is not quite the description you would expect for a photo printing company. Then again, the goal is not to simply print but to make memories tangible on glass, according to Sarah Ludwig, a Fracture employee. Fracture, a term coined by the company’s founders, Abhi Lokesh, 23, and Alex Theodore, 26, is defined as a one-piece glass picture frame that mounts easily to your wall. Based in Gainesville, Florida, the term has now become a 10-person company devoted to changing the way people print and share their digital memories. 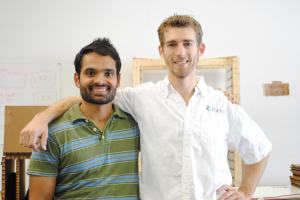 “The idea of Fracture originally came from our desire to work with digital imagery,” explains Lokesh. “We kept circling around the concept of disrupting the photo printing and framing space by creating new, innovative, photo products that were affordable, eliminated all the traditional hassles of photo framing, and could be used by multiple demographics.”

While we are apt to snap away, many digital images remain littered on our hard drives.

“Each picture has a powerful, unique story to tell, but we really don’t have a compelling reason to print and frame any of them,” says Lokesh. “It is just too costly and inefficient.”  Glass emerged as a perfect medium for the two University of Florida graduates to experiment with, mostly because of its modernity and cost-efficiency.

Consumers seem to agree.  In its inaugural year, between 2009 and 2010, Fracture processed approximately 2,500 orders. In 2011, the numbers grew more than five-fold, as the team processed close to 13,000 orders from around the world and generated more than $400,000 in revenue.

Some of that growth can be attributed to a Groupon promotion, which exposed Fracture to over 5000 customers across the country. Ironically, it is also what Lokesh cites as one of the company’s biggest failures and learning experiences. After being overwhelmed with thousands of orders they could not fulfill, Fracture was forced to delay thousands of orders by several months.

“It was incredibly hard for me to watch my teammates be put through something that they couldn’t do anything about. I felt like I failed them by not understanding what exactly we were getting into,” says Lokesh. “We tried to be as transparent as possible with our customers through the entire process and learned an indescribable amount regarding customer relations and company transparency.”

What seemed like a setback turned into a positive growing experience.

“We committed to following through on all the Groupon customers,” says Lokesh. “We didn’t run and try and find the easy way out, as simple as that could have been.”

That is just one of many scenarios that start-ups like Fracture face on a daily basis. Co-founder Theodore says there is no one single lesson you can learn from starting a company. “Entrepreneurship is a mess of lessons that you earn an understanding of only by experience in battle,” he says.

Within the next year, Fracture plans to solidify its production process and branch into new products.  In the long-term, the founders are thinking big.

“We want to be the Apple of photo decor…We’re really just scratching the surface of our potential, and we’re on the edge of some great things”, says Lokesh.

To see the lasting pieces of photographic art you can create, upload your photos to the Fracture website.